10 things you need to know this Tuesday Morning 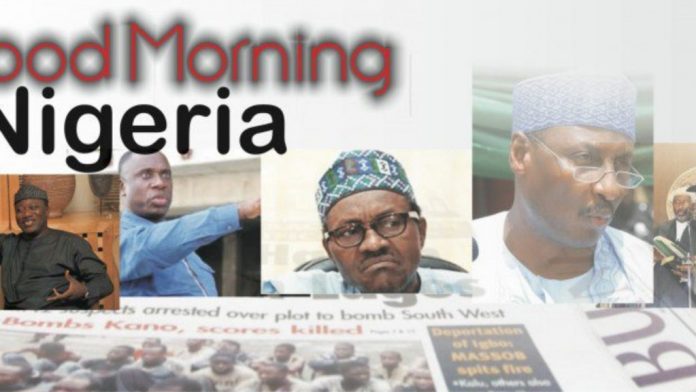 1. Over 50 residents of Ruwan Godiya village of Faskari Local Government Area of Katsina State have been abducted in a fresh attack, according to sources. A resident said the bandits came on over 60 motorcycles and started shooting sporadically.

2. Christopher Inalegwu, elder brother of Benue State Commissioner of Information, Culture and Tourism, has been shot dead. Inalegwu was gunned down on his farm in Aku village, Okololo ward of Agatu Local Government Area, on Monday.

4. A Magistrate’s Court sitting at Nomansland area of Kano, has remanded a former Kano State Commissioner for Works and Infrastructure, Mu’azu Magaji, at a correctional centre in the state. Magaji is facing a four-count charge, bordering on defamation of character, intentional insult, injurious falsehood and inciting disturbance against Governor Ganduje.

6. The Katsina State Police Command has paraded before newsmen on Monday, one Aliyu Abdullahi 22, of Kasuwar Mata street in Funtua Local Government Area of the state for defrauding an unsuspecting old woman of her gratuity using her ATM card and eventually bought a car and motorcycle from the proceed.

7. The Leader of the Indigenous People of Biafra, IPOB, Nnamdi Kanu, has called on the members of IPOB, to avail themselves in the ongoing peacemaking process. This was Kanu’s stand as revealed to newsmen in Owerri, on Monday by his lead counsel, Ifeanyi Ejiofor after they had visited Kanu last Thursday at the Department of State Security, DSS, detention facility in Abuja.

8. Less than 24 hours after the killing of 11 people in Kurmin Masara in Atyap Chiefdom, Zangon Kataf Local Government Area of Kaduna State, gunmen have launched another attack in Atisa, also in Kurmin Masara. A source from the neighbouring village, who confirmed the attack, said the shootings were ongoing as of 11:45pm on Monday.

9. The Independent National Electoral Commission (INEC) has threatened to sanction any politician who engages in direct public political campaign before the designated time approved by the commission. It, however, said prospective aspirants could hold consultations and meetings, so long as they are not direct public gatherings.

10. Four teenagers arrested for murdering and beheading Sofiat Kehinde for alleged money rituals, on Monday, said they were inspired by the guidelines they read on Facebook. The suspects were nabbed in Oke Aregba community, Abeokuta, Ogun State capital, while burning the head of the victim, said to be in a relationship with one of them.