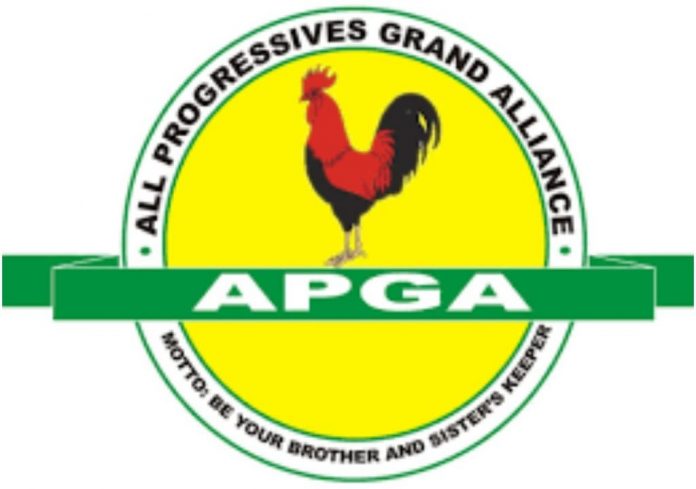 The National Chairman of the All Progressive Grand Alliance (APGA), has boasted that it will win more gubernatorial and legislative seats in Nigeria come 2023 general election.

Ozonkpu Victor Ike Oye, said this in a statement forwarded to DAILY POST on Sunday, by the National Publicity Secretary of APGA, Barrister Tex Okechukwu, at the end of the enlarged meeting of the National Working Committee of the party held at its National Secretariat in Abuja.

The APGA National Chairman also reiterated that the party will spread more and even overtake other major political parties in Nigeria.

Oye said, “APGA is consistently rising, spreading all over the country as the most formidable political party giving its pacesetting antecedents in all democratic ramifications.

“Nigerian people have seen that APGA is transparent, diligent and determined to take the party to the next level, unlike other parties. They are indicating interest to join from all over the country and even from the diaspora.

“Even the defectors are full of regrets and are making frantic efforts to rescind and reverse their mischievous mistakes by decamping to APC”.

He further stated that APGA is the bride and pride of contemporary Nigeria politicians.

Oye said, “the usual sincerity and determination of all the stakeholders in the party, particularly in the immediate past election that produced Professor Charles Chukwuma Soludo as governor and Dr. Ibezim as Deputy governor-elect of Anambra state respectively speaks volumes.

Every astute politician in Nigeria particularly in the southeast has found APGA as the only political haven and are hurriedly taking advantage of that, by trying to join. Other political parties are overwhelmed with the irreversible political crisis”.

Continuing, the national Chairman further reiterated that Governor Willie Obiano of Anambra State did excellently well and that Soludo will definitely do more and improve in the established legacies of Obiano’s administration in the state.

Professor Charles Soludo stated categorically that he has contracted with Ndi ANAMBRA, and that he will bring his wealth of international and national experiences to bear in developing Anambra State, that he has resolved to make Anambra State a haven for investors and even for leisure seekers, he promised massive infrastructural development, security will be at its best, provision of jobs for the youths of Ndi Anambra, partnership with public and private sectors etc”, Oye said.

He, however, used the medium to commend the National Working Committee (NWC) and other party faithful for their unshakable and maximum cooperation since their inception more particularly during the trying times of the immediate past gubernatorial election.

In another development, the Yobe State Executive Committee of the All Progressive Grand Alliance has honoured its national chairman, Ozonkpu Victor Oye for an excellent leadership award.

The State leadership of the party described him as a Colossus and a go-getter.