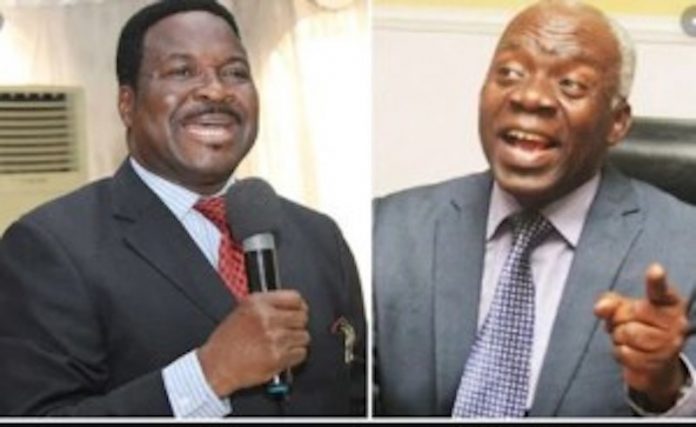 Human rights activists, Mr. Femi Falana (SAN) and Chief Mike Ozekhome (SAN) yesterday lamented that the decisions of serving governors and lawmakers to defect from the political parties that brought them to office were detrimental to the future of democracy in the country.

The senior lawyers, also, lamented that such defections in most cases were not based on any moral or ideological underpinnings, but purely on their interests and convenience.

They expressed these concerns in separate responses to THISDAY’s inquiries yesterday, accusing leaders of both All Progressives Congress (APC) and Peoples Democratic Party (PDP) of political prostitution.

Three governors, who were elected on the platform of the Peoples Democratic Party (PDP), had defected to the ruling All Progressives Congress (APC) in the last seven months, citing divergent reasons to justify their decisions.

Within the same timeframe, no fewer than six senators and 15 members of the Houses of Representatives had defected from the political parties that fielded them for legislative elections.

In response to THISDAY’s inquiries yesterday, Falana pointed out that political prostitution was prohibited in the Second Republic by the 1979 Constitution.

Specifically, Falana said the Supreme Court frowned at the crass opportunism of some politicians who wanted to engage in cross carpeting by abandoning the political parties that sponsored them before the expiration of their term of office.

He, however, said when Alhaji Atiku Abubakar defected from the PDP to the Action Congress (AC) in 2006, the apex court curiously held that he was exercising his freedom of choice to the detriment of the voters that elected him as part of the Obasanjo presidential ticket.

He said: “That was how the apex court opened the floodgate for political prostitution under the current political dispensation. But other cases decided after the Atiku case appear to have altered the state of the law on the vexed issue of cross carpeting.

Based on the clear pronouncement of the Supreme Court, Falana argued that some of the governors who recently defected might be removed from office if they are challenged in a court of competent jurisdictions.

Just two years ago, Falana pointed out that the Supreme Court held that the PDP won the governorship elections in Cross River and Zamfara states.

Based on such categorical judicial pronouncement, Falana argued that it could not be said that the APC “has turned round to win the same governorship elections.”

Falana, however, observed that the law “is settled in the case of legislators who decide to defect,” which according to him, was settled in Section 68(1)(g) of the 1999 Constitution of the Federal Republic of Nigeria.

He, also, cited the celebrated case of Abegunde v Labour Party, noting that the Supreme Court held that a legislator “cannot defect if there is no evidence that the political party that sponsored him is fictionalised and broken into two or more factions.

To that extent, the legislators who recently dumped the PDP for the APC, and vice versa are deemed to have forfeited their seats in the parliament because both political parties are not factionalised. Such legislators are required by law to contest afresh under their newly found political parties.”

Ozekhome, in entirety, agreed that only members of the National Assembly “are constitutionally circumscribed in their capacity to defect or cross-carpet to another political party except certain criteria are achieved.”

Likewise, the senior advocate cited section 68(1)(2) of the 1999 Constitution to establish the unconstitutionality of federal lawmakers, who defected from the political parties that brought them to office.

By section 68(2), Ozekhome said the President of the Senate and the Speaker of the House of Representatives “shall enforce the vacation of his seat by such a member after presenting “evidence satisfactory to the House concerned that any of the provisions of section 68(1) has been breached.”

He, however, noted that no other Nigerian elected public officer including the President or Governor of a state “is prevented from defecting from the political party under which he assumed office to another.

“This is more so, particularly, having regard to the provisions of section 40 of the 1999 Constitution of the Federal Republic of Nigeria (as Amended) that accords every person freedom of assembly and association,” he said.

The senior advocate observed that the sorry state of Nigerian politics “is that any strong moral or ideological underpinning does not drive it. It is simply about interests and convenience. After all, the PDP and APC are merely but two sides of the same coin of political prostitution.

“Most of the members of the APC today, including governors, senators, members of the House of Representatives and Houses of Assembly, and high-profile players in the APC government were once in the PDP.

“Nigeria’s politics has therefore become stunted, devoid of true democracy. And without democracy, there can be no democratic dividends. The nation is the worst for it,” Ozekhome explained.

The senior advocate, therefore, suggested the need “to change this narrative to politics of sanity; politics imbued with deep ideas of conviction, philosophy, ethics, principles, values, morals and national resurgimento.”