Fulanisation Agenda: Garba Shehu, Adesina are under influence of negative substances, Ortom hits back at presidency 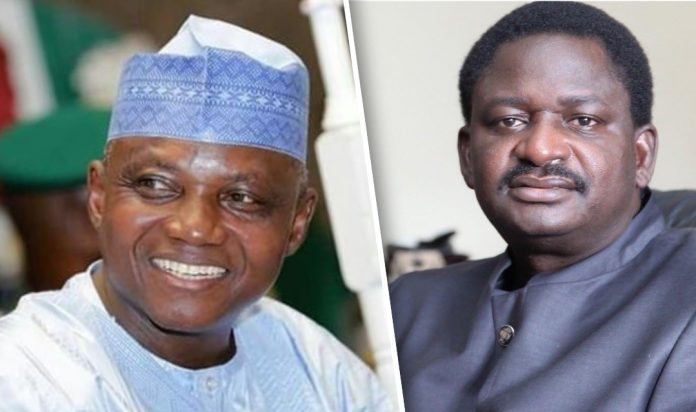 Gov. Ortom excoriated the president’s spokespersons for failing to address the issues he raised but harrying to attack his person.

Benue State governor Samuel Ortom has hit back at the presidency, saying the response to the issues he raised shows that President Muhammadu Buhari’s media aides are “under influence of negative substances.”

But replying to the presidency’s jab, Mr Ortom, in a statement by his spokesman Terver Akase on Thursday, said he stands by his statement, adding that “The tone of the said statement shows the quality of presidency Nigeria currently has. They abandoned the message and went for the messenger.”

The governor spoke the minds of most Nigerians on specific areas of failure of the presidency and its complicity in the heinous crimes committed against citizens by armed Fulani herdsmen and other terrorists. Instead of taking the governor on those points, Shehu went chasing vain and mundane matters in a desperate attempt to malign the governor,” the statement by Mr Akase read.

To describe as ‘undistinguished’, the career of a man who has held many key positions at the state and national levels proves that those who penned the piece were under the influence of some negative substances,” he added.

Gov. Ortom further claimed that he is aware of plot by the Buhari regime to cause crisis in Benue in order to declare state of emergency.

We are aware of the presidency’s plot to cause crisis in Benue and make the state ungovernable and declare a state of emergency.

Whenever each of their plans fails as it happened with the impeachment attempt on the governor before the 2019 elections, they resort to cheap blackmail,” he said.

Gov.Ortom has been railing against the Buhari regime since his opposition to open grazing in his state.

In March, the governor was attacked on his farm in Gboko.

A face group, Fulani Nationality Movement, claimed responsibility for the attack, vowing to eliminate the governor if the anti-open grazing law operated in the state was not reversed.

The presidency later in April told Mr Ortom to accept Ruga, a Fulani settlement for herdsmen, in Benue if he wants his people to enjoy peace.

The National Broadcasting Commission had on Thursday queried Channels TV for airing Mr Ortom’s interview, demanding the TV station to explain why its should not be sanctioned