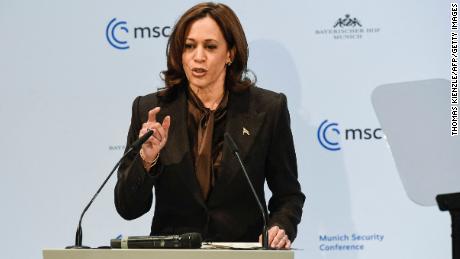 Vice President Kamala Harris on Saturday vowed there would be a “swift, severe and united” response if Russia invades Ukraine and assured Ukrainian President Volodymyr Zelensky the US “stands with Ukraine.”

In remarks at the Munich Security Conference in Germany, Harris laid out retaliatory measures in a manner befitting her past career as a prosecutor, promising “significant and unprecedented” economic costs.

“We will impose far-reaching financial sanctions and export controls. We will target Russia’s financial institutions and key industries. And we will target those who are complicit and those who aid and abet this unprovoked invasion,” Harris said as she took center stage at the security conference, which is taking place as the brewing conflict between Russia and Ukraine reaches a boiling point.

What does Putin want in Ukraine? The conflict explained

The vice president continued, “Make no mistake: The imposition of these sweeping and coordinated measures will inflict great damage on those who must be held accountable.”

In an ensuing bilateral meeting with Zelensky that lasted roughly 45 minutes, Harris told the Ukrainian leader that the US “takes seriously the importance of the integrity and the territorial integrity of Ukraine and your sovereignty, and the United States stands with Ukraine in this regard.”

“Any threats to your country we take seriously, and we have rallied our allies and our partners to speak with one voice,” said the vice president, who was also meeting Saturday with German Chancellor Olaf Scholz.

Harris’ office said in a statement that Harris and Zelensky “discussed the united Transatlantic approach if Russia further invades Ukraine, and the Vice President outlined the swift and severe economic measures that have been prepared alongside our Allies and partners.”
Zelensky said he was grateful for the US support, particularly in bolstering Ukraine’s defense capacity.

“This is our land and the only thing we want is to have peace, bring the peace back to our country,” he said.
US Defense Secretary Lloyd Austin on Saturday said Russia was “moving into the right positions to conduct an attack,” and echoed President Joe Biden’s assertion that Russian President Vladimir Putin had made up his mind on invading.

“They’re uncoiling and now poised to strike,” Austin said, speaking from Vilnius, Lithuania. Austin said the US would pursue a diplomatic solution “until the very last minute, until it’s not possible.”

The US intends to sanction elite Russian government officials and business leaders if Russia invades Ukraine, CNN has reported. Biden has said he would consider sanctioning Putin himself, but the administration has not revealed the names of those it is looking to sanction.

In an interview Saturday with CNN’s Christiane Amanpour after his meeting with Harris, Zelensky said any list of sanctions on Russia should be made public before an invasion of Ukraine occurs.

Another option US lawmakers are weighing that would have major repercussions inside Russia is cutting the nation off from the global banking system. Russia could be removed from SWIFT, the high-security network that connects thousands of financial institutions around the world.

The move would make it nearly impossible for financial institutions to send money in or out of Russia, which would deliver a shock to Russian companies and their customers abroad. If Russia is cut off from SWIFT, senior Russian lawmakers have said shipments of oil, gas and metals to Europe would stop.

A unified response
Harris’ remarks at the conference Saturday echoed repeated pledges from top US officials in recent days of a unified response to efforts by Russia to mount an invasion.

“Not since the end of the Cold War has this forum convened under such dire circumstances,” Harris said. “Today, as we are all well aware, the foundation of European security is under direct threat in Ukraine.”

The vice president emphasized the importance of international organizations, institutions, laws and treaties that she reiterated have led to “unprecedented peace, security and prosperity” in Europe in the wake of two world wars. Harris stressed that at the heart of these defining principles is the belief that the sovereignty of nations must be respected, that nations have the right to choose their own governments and alliances, and “national borders should not be changed by force.”

“In the face of Russian aggression, I have been reassured and heartened by the widespread agreement across the trans-Atlantic community that these rules and norms will be defended,” Harris said.

Ratcheting up the rhetoric, Harris accused Putin of feigning “ignorance and innocence” while simultaneously working to fabricate a false pretext for an invasion. Harris warned the “playbook” of Russian aggression is “too familiar to us all.”

“We now receive reports of what appears to be provocations and we see Russia spreading disinformation, lies and propaganda. Nonetheless, in a deliberate and coordinated effort, we together are one, exposing the truth and two, speaking with a unified voice,” Harris said.

Harris emphasized the US maintains an “ironclad” commitment to Article 5 of the North Atlantic Treaty Organization, which says if any NATO member is attacked that every other member of the alliance will consider it an attack against all members and will take any swift action to retaliate.

“We will not stop with economic measures,” Harris said. “We will further reinforce our NATO allies on the eastern flank.”
Biden formally approved the deployment of 3,000 US troops to Poland, Germany and Romania in order to bolster NATO countries in Eastern Europe as tens of thousands of Russian troops are amassed along Ukraine’s border. The President has stressed these troops will not be deployed to fight inside Ukraine and are instead there to show support to NATO allies feeling threatened by Russia’s military moves.
“Today, the United States, our allies and our partners are closer together,” Harris said.

A high-stakes moment
The vice president’s emphasis on Russia-Ukraine tensions follows several efforts by the United States on Friday to publicize Russia’s aggressive actions in the region and attempt to prevent Russia from invading Ukraine under the guise of false pretenses.
Biden said that he is now convinced Putin has made the decision to invade Ukraine, adding that the US believes Russian forces intend to attack Ukraine “in the coming week” or sooner and that an attack will target the Ukrainian capital of Kyiv.

It was a major rhetorical shift for the President, who had previously indicated that he believed Putin had not yet made up his mind about an invasion. Still, Biden emphasized on Friday, there was room for diplomacy.

Russian misinformation is building up to a false justification for Putin to order an invasion, Biden said, accusing Russia of cease fire violations in the “rapidly escalating crisis.”

The White House on Friday also blamed Russia for a massive cyberattack on Ukraine earlier in the week and warned that Russia could face extensive sanctions if it invades Ukraine, with Daleep Singh, deputy national security adviser for international economics and deputy director of the National Economic Council, calling them “the most severe measures we’ve ever contemplated against Russia.”

The ministry accused the U.S. of attempting to tarnish the image of North Korea in the international arena. North Korea has denied having arms deals...
Read more
International News

The 70-year-old Russian leader’s health has long been the source of speculation - with Western intelligence suggesting he has serious health issues. Leaked spy documents...
Read more