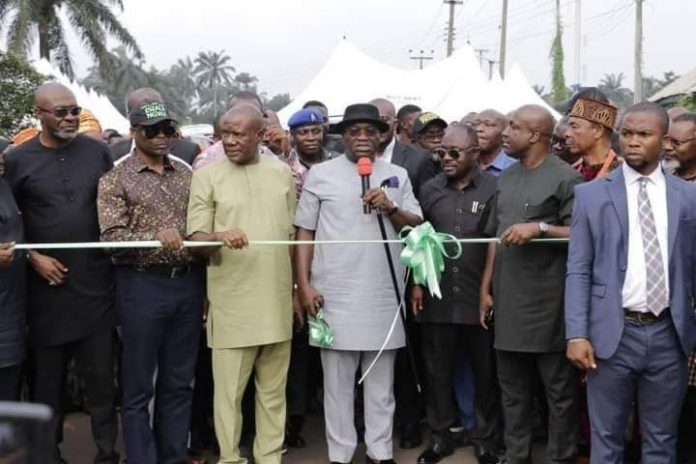 Governor Okezie Ikpeazu has commissioned the first phase of the newly constructed AMAOJI JUNCTION-ABAYI- ISI COURT ROAD in Isiala Ngwa North LGA and also flagged off the construction of the second and final phase of the road.

Speaking at the event which is in continuation of his ‘Kinetic Abia‘ Project Inspection and Commissioning Programme, Dr. Ikpeazu said he would deploy every resource to ensure the project is fully delivered and the second phase commissioned soon.
Governor Ikpeazu said he expects the benefiting communities to nurture the road as it would be a disservice for the people to burn tyres or erect illegal speed breaks on the road.

On the request of the people that the proposed Ntigha Dry Port comes to fruition, Governor Ikpeazu stated that he is desperate to actualize the establishment of the dry port. He said there could be no better gift to Abia people than a dry port of final destination, where people would clear their goods in the State. He further informed that the dry port when realized would serve Ndị Igbo and Nigerians at large.

The Governor told people to disregard insinuations of abandoning the project and other projects in the State assured that he would continue to serve the people and deliver democracy dividends to them. He said he is encouraged by the outpouring of love from the people to him at the event.

Speaking also, the Member representing Arochukwu /Ohafia Federal Constituency, Hon. Uko Nkole commended the Governor for constructing the road,adding that rural roads add value to the economy of the people in addition to reducing rural-urban migration. He said PDP under Governor Ikpeazu is making progress and urged the Governor to continue.

Contributing, the Member representing Isiala Ngwa North State Constituency at the State House of Assembly and Chairman, House Committee on Works and Projects Monitoring, Hon. Ginger Onwusibe thanked the Governor for the initiative to start the road and completing the first phase and pleaded with him to use the same speed to complete the second phase. He appreciated the infrastructural developmental works the Governor has done in Aba and other parts of the State.

In his remarks, the Commissioner for Works, Elder Bob Ogu disclosed that the Governor has developed a template with which roads are flagged off and commissioned. He said the roads built in the State have at least 20 years guarantee and asked the benefiting communities to protect the road and ensure that no bonfires are set on the road as they degrade the asphalt.

Also, the PDP State Chairman, Rt. Hon. Asiforo Okere thanked Isiala Ngwa North people for the support given to PDP and urged them to enroll in the ongoing voters registration exercise, while thanking the Governor for making the party proud consistently.

The Chairman of the State Inter-Party Advisory Council (IPAC), Chief Ceekey Igara affirmed Governor Ikpeazu has changed the life style of people of the area and introduced a new way to survive as well as retain people in the village. He said if the Governor does the same in all parts of the State, Abia would develop faster.

In her speech, the Permanent Secretary, Ministry of Local Government & Chieftaincy Affairs, Mrs. Joy Nwanju informed that the road project is an intervention project initiated in 2019 and expressed happiness that its first phase is being commissioned by the Governor, who equally is the initiator. She said that the road is one of the three joint intervention projects done with the Local Governments in the State.

Speaking on bahelf of Isiala Ngwa North Stakeholders, a former Speaker of the State House of Assembly, Rt. Hon Christopher Enweremadu said the road has been a nightmare and remained unaccessible for the past 25 years. They said the people of Isiala Ngwa are grateful to the Governor for constructing the road as well as his other numerous projects which has created multiple chains of employment for the people. They requested that the proposed Dry Port project needs to be operational as it would open the economy of the State and increase revenue generation among others

Speaking on behalf of the youth of Ngwa Ukwu La Nwaoha, Mr. Chima Nwosu saluted Governor Ikpeazu for remembering the people and fixing their roads. He assured of the continuous support of the people to the administration of Governor Ikpeazu.

Secretary to Government, Barrister Chris Ezem, the Chairman of the Abia State Traditional Rulers Council, Hrm Eze Joseph Nwabeke and a Commissioner in the Abia State Oil Producing Areas Development Commission, Chief Uzo Ihuka were amongst other top dignitaries who witnessed the event.

Facebook
Twitter
Pinterest
WhatsApp
Previous articleABIA STATE GOVERNMENT TO PARTNER MORE WITH SECURITY AGENCIES.
Next articleAPC: I had no hand in crisis that consumed you – Keyamo fires back at to Oshiomole

As the forthcoming general elections approaches it's climax,a member of the House of Representatives, Alhassan Ado-Doguwa, has issued threats to members of his constituency...
Read more
2023 ELECTION:

The All Progressives Congress, APC, presidential candidate, Bola Tinubu, says he has never lost any election he contested. Tinubu made the remark while criticizing the...
Read more