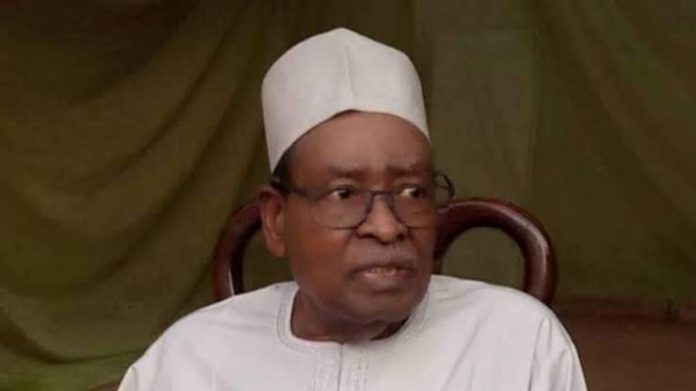 A former Chief of Army Staff, Mohammed Inuwa Wushishi, is dead. He was 81 years old.

The indigene of Niger State reportedly died in the early hours of Saturday at a London hospital where he has been receiving treatment after a protracted illness.

His death was confirmed in a statement by Mary Noel Berje, spokesperson to the governor of Niger State, Abubakar Bello.

Gov. Bello described Wushishi’s death as a great loss to the state and the nation at large considering his statesmanship roles over the years.

The Chairman North Central Governors Forum said government and people of Niger State are indeed saddened by the demise of the Former Chief of Army staff who coordinated the activities of elder statesmen in the state over the years and made immense contributions to the peace, growth and development of the state and Nigeria as a whole.

The Governor maintained that even after active service, late Gen. Wushishi continued to offer useful counsel that helped in the development of the society.

He said the death of Gen. Wushishi has created a vacuum that can only be filled by Allah, pointing out that the society will miss his wise counsel which are most needed now in overcoming the numerous challenges that have bedevilled Nigeria in general.

Gov. Bello prayed to Allah to forgive all the shortcomings of the deceased and grant him Aljahna Firdausi as well as give the entire people of the state and close associates the fortitude to bear the great loss.

General Wushishi was born in 1940 in Wushishi, Headquarters of Wushishi Local Government Area of Niger State.

He joined the army on 21 April 1961, and attended the Nigerian Military Training College, Kaduna and then the Mons Officer Cadet School, Aldershot in the United Kingdom.

He was commissioned as a second lieutenant on 12 January 1962 and later attended the United States War College, Carlisle, Pennsylvania.

He served as a member of the United Nations Peace Keeping force in Congo in the early 1960s.

He was appointed Deputy Commandant, Army School of Infantry in July 1975. He served as Federal Commissioner for Industries (January 1975 – March 1976) and was a member of the Supreme Military Council from 1976 to 1978.

He was Chief of Army Staff (COAS) from October 1981 to October 1983 during the Shehu Shagari administration.

He was forced to retire on 3 January 1984, after the 31 December 1983 coup in which General Muhammadu Buhari came to power.

After retirement, he entered business.

He became chairman of the board of directors of UAC of Nigeria, retiring on 1 January 2010 at age 70.

There is a palpable fear of a fresh round of strikes in Nigerian public universities as the Academic Staff Union of Universities, ASUU, holds...
Read more
Featured

Uruguay legend Diego Forlan has picked France as the best team in Qatar so far. Many people believe Brazil is the strongest team at the...
Read more

Portugal captain, Cristiano Ronaldo has reacted to his side’s World Cup 6-1 win over Switzerland in the round of 16 on Tuesday. Ronaldo, who did...
Read more
Load more