Mykolaiv region on edge amid fear of a new Russian offensive 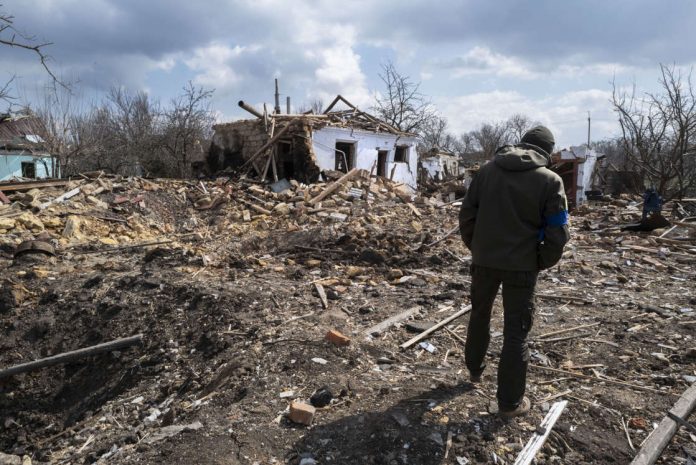 MYKOLAIV, Ukraine — Red-and-white police tape blocked off the perimeter of the strip mall as if it were a crime scene. The glass storefronts were all shattered. Some potted plants remained on a table where a woman’s flower stand had been. Dried blood stained the ground next to it.

Russian shelling killed 10 people and injured 61 in the town that day, according to the Mykolaiv regional governor. One business owner still opened her flower shop across the street the next morning. She said the only thing that sells these days are the red carnations, a flower Ukrainians traditionally place on caskets at funerals.

Russian bombardment isn’t new to Mykolaiv, a southern Ukrainian city of about 500,000 people. This has been a key front since the start of the war, where the Ukrainian military has barred Russian forces from advancing west toward the key Black Sea port of Odesa.

But as the Russian military has withdrawn its troops from the Kyiv region in an apparent shift in strategy, people here fear that Moscow is preparing a new offensive to gain more ground in the south. Over the past week, there has been an increase in attacks during daylight, when civilian areas such as Victory Square are most crowded. Multiple hospitals have been hit. The head of the Mykolaiv district prosecutor’s office was detained Tuesday for allegedly passing sensitive information to Russian security services in exchange for his safety should the region fall to the invading forces.

A city that has been a symbol of Ukrainian resolve and defiance is suddenly on edge.

Local officials, including Gov. Vitaliy Kim, say the Russians are trying to sow panic and fear among Mykolaiv’s residents. The morning after the strikes on Victory Square, hundreds of people waited in line at a parking lot for evacuation buses to Odessa and the Moldovan border.

We held on here until the last possible moment,” said Angelina, who boarded one of the buses with her four children. “Now it’s too much. We have to leave.”

Analysts who track Russian military movements on open sources said there is no evidence yet that Moscow is deploying more forces to Kherson, a Ukrainian city about 50 miles to the southeast that Russian troops have occupied since the early days of the war. Although Ukrainian forces have kept Russians out of Mykolaiv, parts of the city remain in artillery range of Russian positions in Kherson.

You broke a window in our house, and we took a tank from you,” a soldier said in the video.

Rob Lee, an expert on the Russian military and a senior fellow with the Foreign Policy Research Institute, said Moscow’s initial campaign to advance along Ukraine’s Black Sea coast failed because the military units in the area “bit off more than they can chew” between occupying Kherson and then trying simultaneously to capture both Mykolaiv and Mariupol, a port city on the Sea of Azov.

“It doesn’t appear they’ve made Mykolaiv a priority for the last two weeks or so,” Lee said. “I think they just ran into a point where they were like, ‘We just can’t take this city.’ ”

But officials in Odesa and Mykolaiv said they are worried and planning for increasing Russian aggression.

Dmytro Pletenchuk, a press officer for the Mykolaiv regional government, said, “We are preparing to defend our city.”

“We know their plans aren’t changing,” he said. “We know that after us, they have Odessa in their sights.”

In a video that Kim, the governor, posted to Telegram on Friday, he said Ukrainian “reinforcements are on the way” to Mykolaiv. He did not offer any details.

In Bashtanka, a town about an hour northeast of Mykolaiv, local people are similarly bracing for a second bout with the Russians. The first was a surprising and convincing victory for the Ukrainians. Some 50 members of the Territorial Defense Forces, made up of civilian volunteers, and other residents rebuffed a Russian advance that included some 250 armored vehicles, the mayor said.

“Grandpa Vasiliy” is now a legend around town after the elderly man purportedly single-handedly knocked out a Russian tank with a molotov cocktail or petrol bomb. His identity is a local secret: people around town fear that if the Russians return, soldiers could target him. The Washington Post could not independently verify that story, but locals insist it is true and say it has inspired the town.

Bashtanka is in a key position on the road to Mykolaiv. Any Russian plan to encircle Mykolaiv must account for this town of about 12,000 people. Mayor Oleksandr Beregovyi said only 20 percent of the town’s residents have remained. The 40-year-old has evacuated his own young family because Ukrainian officials have said that several mayors in places captured by the Russians were kidnapped.

New Ukrainian defensive trench positions are being prepared, and unexploded ordnance left behind in the Russians’ last attempt to enter the town is still being removed. More than 170 buildings were damaged in the fighting, Beregovyi said.

“We’ll defeat them,” Beregovyi added. “I wouldn’t call them warriors; they are just crooks, murderers, rapists. They aren’t human.”

To Mykolaiv’s northwest, in the small city of Voznesensk, which is close to a nuclear power plant, Mayor Yevheni Velichko said he has information that the Russian forces are gathering for a second offensive in the area. As in Bashtanka, the Russians suffered losses in Voznesensk. But that doesn’t mean the locals want to repeat the fight.

I don’t know if we’ll ever be ready for war,” Velichko said. “We are peaceful people. We don’t want this war. But to the last man, we’ll defend our families and our land.”

US, Germany battle tanks will burn in Ukraine – Russia

Russia has declared that the battle tanks to be supplied to Ukraine by the United States and Germany would “burn”. The U.S. is sending at...
Read more
WAR

One of the Ukrainian Presidential advisers, Mykhailo Podolyak, has revealed that as many as 13,000 Ukrainian soldiers have been killed in battle since Russia...
Read more