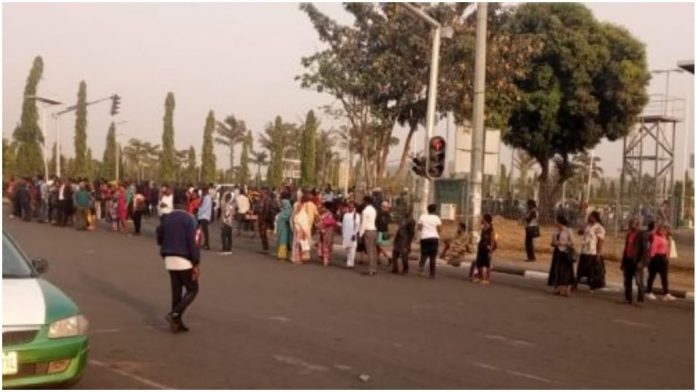 Residents of the Federal Capital Territory, FCT, have lamented the non-availability and high cost of Premium Motor Spirit, popularly known as petrol.

Latest checks by DAILY POST revealed that the non-availability of fuel has led to a boom in “black market” sales, as motorists have opted to patronize the only available channel of getting the product.

Taking advantage to make brisk sales, black marketers in Kurudu area of Abuja sell a litre of fuel at 1,000 naira, while 10 liters is sold for N4,500 in Gwarimpa area, DAILY POST gathered.

I bought two liters of fuel for two thousand naira from black market, because no filling station is selling around my area. From Kurudu to town is now 1200, Keke to Nyanya is 500.

10 liters of fuel in the black market now sells for N4,500 from Gwarimpa area,” a motorist lamented to DAILY POST correspondent.

Commuters in their large numbers are stranded because the number of commercial vehicles plying the routes of Abuja have drastically reduced. Most passengers and motorists now opt to trek distances as fewer vehicles are on the road.

It was observed that bus stops are now more crowded than ever, as fewer vehicles are on the road, with longer queues witnessed in petrol filling stations across the city.

Similarly, DAILY POST have observed that cabbies, such as Uber and Bolt drivers have abandoned the use of Apps as they would negotiate a fresh price with intending passengers different from the amount shown on the Apps.

Most of them complained that the company has refused to increase the fare despite buying fuel at exorbitant prices.

The development has forced many drivers to stop work, as few drivers are available on the App, checks by DAILY POST Wednesday morning have shown.

The importation of millions of adulterated PMS from Europe into Nigeria, as claimed by the Nigerian National Petroleum Corporation has no doubt, disrupted the fuel supply system of the country, leading to long queues and untold hardships to Nigerians.

Speaking on the development, Anthony Ehilebo, an Abuja-based lawyer and member of the Peoples Democratic Party, PDP, said President Muhammadu Buhari should be held responsible for the situation in Abuja and across the country.

Speaking with DAILY POST, Ehilebo said Buhari should be held accountable because he is the Minister of Petroleum in Nigeria.

He noted that Buhari and all those involved in the importation of adulterated fuel should be blamed over the ongoing fuel scarcity.

The PDP member wondered why the government would spend millions of naira trying to clean up the adulterated fuel.

According to Ehilebo: “We should hold Mr. President responsible, he is the Minister of Petroleum. If he decided to take responsibility for a particular ministry and something goes wrong, then he would be held responsible.

Mr President is solely responsible, can you imagine? After importing petrol that is contaminated, you still want to take two hundred and one billion naira from the public purse to clean that petrol? Somebody is going mad and it’s not you or I but the people who are supposed to know that they don’t just play with public funds.

The person who imported that fuel should pay for the cleaning of the fuel. Now, we have a company which is the sole company that imports petroleum products into Nigeria- Duke Oil and it has the Managing Director of NNPC as the Chairman of the Board. Duke Oil is not listed in any CAC registration in Nigeria, how can you be the sole importer of fuel in Nigeria and you are not registered in the country? This same Duke oil declared N500m profit and was audited by a firm that is not known.

The only place you can find Duke Oil is if you search as far as UAE or the UK; something fishy is going on and it shows that our President has no control over the affairs of this country and it’s very unfortunate.”