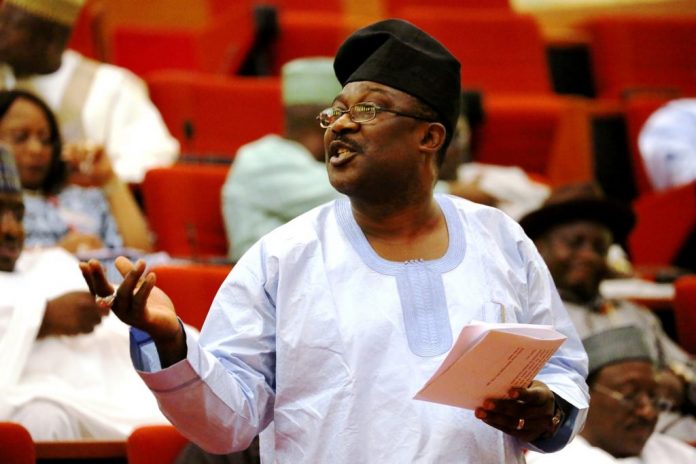 Senator representing Kogi West Senatorial District, Smart Adeyemi said the rejection of Section 84(12) of the Electoral Act after President Muhammadu Buhari’s request for it to be amended was in fairness to Nigerians and the democratic growth of the country.

Smart spoke to journalists on the outcome of rejection of the request by Buhari for the parliament to amend the section to pave way for political office holders to serve as delegates and to also contest elections.

The section provides for political appointees to resign from office if they so wish to contest election into political offices.

But reacting differently in a media interview with journalists, Senator Adeyemi explained that it would be unfair and also an injustice for political appointees to go the field with an ordinary citizen to contest the election because of the advantage of office an appointee already has, insisting that fairness demands that all contestants should have a level playing field.

Mind you, we are talking about politics in a democratic system. Now, if you are holding on to executive power, and you want them to go to the same field with people who do not hold executive power, is there justice and fairness?

Don’t forget that because of lack of gainful employment of where people can make their livelihood, the unfortunate thing today is that many people who are compelled, maybe due to failure of the system or of the people in politics or problem due to economic recession, people now see politics as a profession.

Somebody who has not worked anywhere, though not of his making, who probably out of frustration and no job, decides to go into politics, whatever his paymaster tells him is what he is going to do. So, ab initio he is already compromised,” he said.

The lawmaker further explained that the electorate is becoming wiser by the day and would ask questions about any candidate, hence, political parties should be careful about who should be their candidate.

Such people cannot have the right frame of mind to decide what is good for the country. They will vote according to directives given to them. Now, let me say this, the incoming elections in Nigeria will not be a matter of party consideration. Nigerians are wiser; they will ask you who is the candidate, what is the antecedent, where is he coming from?

So, we took the decision we took on the amendment bill to the Electoral Act because it was the best thing for our nation,” he said.

The lawmaker emphasized that the decision of Senators to throw away the request was not for any ill-motive against the President or anybody, but as senators, it would be recorded for or against them in future, what they are doing now.

You know that anybody that is in the Senate must count himself as lucky to be so recognised to represent the people and defend their needs, their aspirations and their future.

So, when you are in the Senate, there comes a time when politics on the basis of party affiliation will be secondary. In essence, you will be looking at issues dispassionately based on what you know is good for your country because whatever we do here is recorded and is going to become history.

Democracy can equally be the worst form of government when you deliberately refuse to speak at all. So, in essence, democracy can the best form of government when those who have been elected speak their minds on the basis of what is good for the country; and party considerations made secondary, the people come first; the peace, stability, prosperity and economic emancipation of the people are of greater concern than the pedestrian sentiments of politics.

So, what we saw during the debate on the proposed amendment to the 2022 Electoral Act was a consideration of the fact that we took all the factors available into consideration and we stood our ground to say this is the best for our country.

They will not do anything that will be harmful to the peace, stability and progress of their nations,” he said.

So, you will now ask, what do the Bible and Quran ask us to pray for our country and to that which is just and fair to all, irrespective of your religion.

Both the Bible and the Quran have the meeting point of “love your neighbour as yourself”. Now, that can only happen where there is good governance. So, when a bill comes, you have to look at it from the angle of what will this portray for our nation.

There are insinuations beyond public interest, the Senate took that step in order to curtail the excesses of the State Governors, who use their aides as delegates during party primaries to overwhelm their opponents such as members of the National Assembly, who don’t have such advantage of numerous aides.”

As the forthcoming general elections approaches it's climax,a member of the House of Representatives, Alhassan Ado-Doguwa, has issued threats to members of his constituency...
Read more
2023 ELECTION:

The All Progressives Congress, APC, presidential candidate, Bola Tinubu, says he has never lost any election he contested. Tinubu made the remark while criticizing the...
Read more