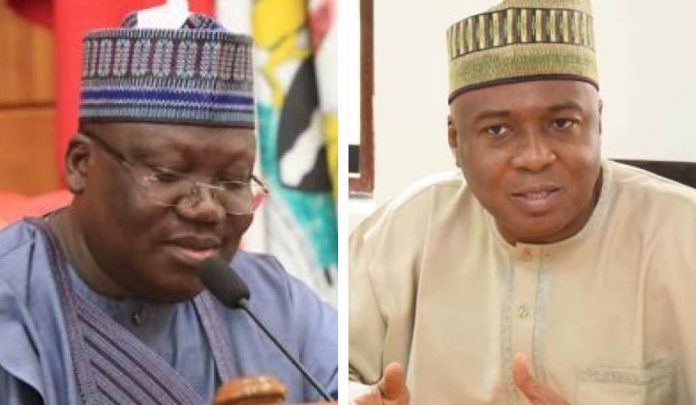 The senate on Tuesday amended its rule book following the consideration of a motion pursuant to Order 111 of the Senate Standing Rules 2015 during plenary and several sections were amended, but the high points of the exercise were the approval of simple majority for the election of presiding officers and the retention of a closed ballot system of voting for same.

The Chairman of the Rules and Business Committee, Senator Suleiman Sadiq Umar (Kwara North), in his presentation, recalled that the Senate Standing Orders were last amended in 2015 “to accommodate issues that will make such orders dynamic to facilitate effective legislative process.”

Sen Umar noted that despite the
amendment there were a number of issues that required further amendment in response to emerging developments which required enhanced rules of practice and procedure for sound legislation to tackle such developments.

The Senate President, Ahmad Lawan, said, “As far as I know this is the first time that the senate would amend its standing rules in plenary; a huge sort of exercise to introduce and sustain efficiency in the operations of the senate. We believe that this will go a long way in making us do better in our activities here in the senate.”

Lawan’s comments on the rancour-free exercise apparently alluded to the controversy that trailed the previous amendments to the standing orders used for the 2015 elections of Bukola Saraki and Ike Ekweremadu as senate president and deputy respectively.

The emergence of Saraki as senate president in the 8th National Assembly pitched his supporters nicknamed “Like minds” against those of Lawan’s “Senate Unity Forum” who accused the former of conspiring with bureaucrats in the federal parliament to “illegally alter the senate rules with the intent of “dubiously” ensuring Saraki’s emergence.

The alleged illegal alteration of the rule book now “Senate Standing Orders 2015 as amended” contains provisions that differ from the 2011 orders.

The voting pattern proposed by the Standing Orders 2011 provides an election process where all senators are required to openly declare support for the candidate of their choice, while the 2015 version provides for secrecy in the voting procedure.

In law, the word “SHALL” is an imperative command usually indicating that certain actions are mandatory, and not permissive.

Saraki emerged unopposed, as his main rival, Lawan, and members of his Unity Forum were at the International Conference Centre (ICC) for a purported meeting with President Muhammadu Buhari when the election took place.

From its inauguration in June, 2015, Saraki’s senate presidency was enmeshed in a protracted crisis that lasted up to the end of its lifespan.

The Lawan camp reported the alleged forgery of the rule to the police for investigation and several individuals involved in the matter were quizzed.

A former Clerk of the Senate, Benedict Efeturi, told police investigators that the 2011 version of the senate rules was amended based on the directive of the 7th Senate’s leadership, led by its president, David Mark.

He stated that, “The leadership of the National Assembly of the 7th Senate ordered the 2015 Standing Rules as amended by their convention and practice,” and that the Senate Standing Orders 2003, 2007 and 2011 followed the same procedure as that of 2015.

He told the police that in the parliament, amendment of the Standing Orders was “by practice; not necessarily by procedure.”

However, Ita Enang who chaired the Committee on Rules and Business in the 7th Senate told the police that his panel proposed the amendment of the 2011 standing orders, but that up to the expiration of their tenure, the proposal was not debated and approved or rejected at any sitting.

Lawan’s supporters, in their separate statements, said the 7th Senate did not amend the 2011 Standing Rules and that thus the amended rules used for inauguration of the 8th assembly was fraudulent since there was no compliance with the requirements for amendment of senate rules.

In their recommendations, the police stated that, “From findings, especially from the statement of the Clerk of the Senate who doubles as the Deputy Clerk of the National Assembly, the Senate Standing Orders 2015, which was used to inaugurate the 8th Senate on June 9, 2015, was ordered by the leadership of the 7th Senate without following Section 110 of the Senate Standing Rules 2011 (as amended) which requires that any amendment to the rules must be debated and approved by senators on the floor of the senate.

This practice where some senators amend the rules of the senate without following legal procedures is not only criminal but portends danger for our growing democracy; it should be discouraged.”

The report, dated July 14, 2015, was forwarded to the Attorney General of the Federation, Abubakar Malami, to determine “if this conduct constitutes crime or should be treated as internal affair of the senate”.

Based on the recommendations, Saraki, Ekweremadu, a former Clerk of the Senate, Efeturi, and a former Clerk to the National Assembly, Salisu Maikasuwa, were charged with forgery and arraigned before a high court in Abuja.

They denied any wrongdoing. Saraki and Ekweremadu accused President Muhammadu Buhari of bias, and argued that the case was a violation of the independence of the legislature.

During Tuesday’s consideration of the motion for the amendments, senators raised deep concerns on Order 2, that stipulates the procedure for electing presiding officers, apparently to avoid a repeat of the 2015 scenario.

The Chairman of the Committee on Rules and Business, Suleiman Sadiq Umar, and the Vice Chairman who is the Senate Leader, Yahaya Abdullahi, who sponsored the motion, had proposed in their report that “The Clerk of the Senate, before proceeding for the election of presiding officers, shall ensure that two-third of senators-elect are present.”

He based his argument on the ground that should some senators decide to stay away on the first legislative day, the inaugural sitting would not hold due to lack of quorum and therefore the election of the presiding officers would be stalled.

Senator James Manager (PDP, Delta) threw his weight in support of a two-third majority for the election of officers, saying the inaugural sitting and election of presiding officers of the senate were very important occasions.

Senator Ibikunle Amosun (APC, Ogun Central) on his part kicked against the adoption of a two-third majority, urging his colleagues to be cautious.

At this point, Senate President Ahmad Lawan cautioned that an amendment in the direction of a two-third majority could be exploited to stall the inauguration and election of presiding officers.

He, therefore, urged his colleagues to approve the proposed amendment to simple majority.

However, Lawan’s Deputy, Ovie Omo-Agege, said there was merit in both arguments and suggested that the two-third majority be adopted with a caveat.

Omo-Agege said, “In the event that this fear (lack of quorum) comes to reality, then we shall revert to simple majority for the purpose of electing presiding officers.

If, on the first day, it becomes clear to those present that there is a move to frustrate the election of presiding officers due to lack of quorum (two-third majority), then the presiding officers can be elected based on simple majority.”

Lawan countered the submission, saying on the first day before inauguration everyone was a senator-elect and lacked the authority to make that judgment except the Clerk of the Senate.

Lawan said, “We should not give the clerk so much power and then senators-elect leave this place in disappointment. We need to look at this very critically because nobody who comes here that day is a senator and he or she can’t take decision. The clerk is the only person who can take that decision.”

The ayes have it,” Lawan ruled in support of a simple majority for the election of presiding officers.

Some lawmakers were, however, not comfortable with the ruling.

Senator Rochas Okorocha (APC, Imo) proposed an amendment for a two-third majority spread across all geo-political zones of the country, but his proposal failed owing to the refusal of senators to second same.

What the senate’s approval of simple majority for the election of its presiding officers means is that 18 or less senators-elect from one geopolitical zone of the country can decide who becomes the senate president and deputy.

That is; if ten senators-elect out of the 109 were present on the day of the inaugural sitting of the Senate, the inauguration will go ahead and the presiding officers will be elected.

Many expressed concern that lack of adequate representation from across the country in the election of the country’s number three citizen and his/her deputy is not democratic enough for a diverse nation like Nigeria.

France striker, Kylian Mbappe, has said he is not at the 2022 World Cup to finish as the top scorer. According to Mbappe, his major...
Read more
Breaking News

Phil Foden and Bukayo Saka have hailed their national teammate, Jude Bellingham, describing him as one of the most gifted players in the world. Bellingham...
Read more