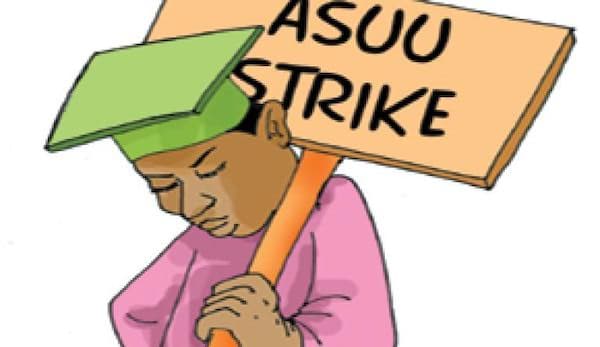 The National Association of Nigerian Students (NANS) Monday staged peaceful demonstrations in different parts of the country to protest the continued strike by the Academic Staff Union of Universities (ASUU).

The students held demonstrations in the Federal Capital Territory (FCT), Niger, Oyo and Kano states and vowed to continue demonstrations, block federal highways and shut down government activities until the striking lecturers returned to class.

ASUU had embarked on a four-week strike that began on Monday, February 14, over what the union called the federal government’s failure to implement agreements reached with the university lecturers.

The union is demanding an improved welfare package, adequate funding of university education and proliferation of universities without solid foundations, among others.

The students blasted both the federal government and the striking lecturers for failing to resolve the issue, saying the disruption of academic activities on the campuses has negatively impacted them.

NANS President Sunday Asefon, who led the protest to the Ministry of Education in Abuja, said it would continue on Tuesday at the venue of the ASUU-government conciliation meeting.

In Minna, Niger State, NANS zonal coordinator, Hussaini Ebbo, warned that “The next time we are up on the street to demonstrate, we will ensure that we shut down all ministries and parastatals.”

Ebbo accused the federal government of insincerity in handling the issue, adding that students are tired of the constant strikes by university lecturers.

The “federal government is yet to take a bold step to end these constant strikes by lecturers,” he added.

In Oyo, the B zone of the students’ body advised the federal government and ASUU to resolve their crisis and end the ongoing strike by the union for the sake of students.

NANS said ASUU should consider that they rigged elections for politicians, adding that the union needed not to go on strike whenever they had a disagreement with the same people they helped into offices.

Speaking at a protest held at the Secretariat of the Nigeria Union of Journalists (NUJ), Oyo State Council, the Southwest Coordinator of NANS, Tegbe Steven Fiyinfoluwa, vowed to block all the federal roads on Tuesday, if the federal government and ASUU failed to reach an agreement.

He said, “If the federal government and ASUU refuse to resolve today, we won’t hesitate to go by the way of violence.

“We are calling on the federal government to learn how to respect agreements.

“Meanwhile, it is the same members of ASUU that rig elections for politicians. Though we don’t have any issue with them because they are our fathers and teachers but we need to say the truth.

“Again, ASUU members should have decisive ways to deal with issues rather than going on strike all the time because they are wasting our time.

“We are appealing to the federal government and ASUU to resolve the issue and allow us to go back to our various classes.

“If the federal government refused to settle today, we shall continue to return to the street for protest until our demands are met.

“The instruction from the national office of NANS is that all the federal roads should be blocked but as a coordinator, I have to consider many factors including security implications before giving such instruction to block all the roads.

“If peradventure ASUU and the federal government refused to make up today, we will block all the federal roads tomorrow.”

In Kano, students also came out in large numbers to protest the lingering strike action by university lecturers.

Speaking to Daily Trust in Kano, the national vice president, NANS, Yazid Tanko Muhammad, said the prolonged strike was taking a toll on students’ academics urging the government to do the needful to end it.

He said, “We are being calm, but seriously, the government should do something about it because it is having a negative effect on our academic activities. Students are not happy.

If really education is of concern to the government, then they should do anything possible to come to terms with ASUU so that students will be back to school.”

The students marched from Kofar Nassarawa Bridge in Kano City to Ministry for Higher Education and to the Emir’s palace carrying placards and chanted solidarity songs.

The Emir of Kano, Aminu Ado Bayero, who received the students at his palace, assured them of the emirate’s resolve to intervene.

Meanwhile, the founder of the African Institute of Science Administration and Commercial Studies in Republic of Togo, Prof Busari Shamsuddeen Akande, has deplored the move by the students to block highways.

The professor of Business Finance, while speaking to our correspondent in Cross River, said blocking major roads would impact negatively on road users.

He wondered how the blockade of federal roads would resolve ASUU issues.

“It’s a misplacement of priority. The end-users, who are Nigerian students from lower backgrounds, will suffer the most. Instead of major roads blockade, they should rather move to National Assembly and Presidency,” he said.