Vladimir Putin has succeeded in uniting his opponents 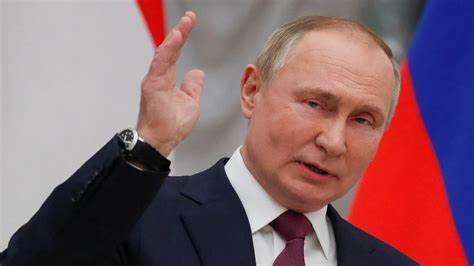 London (CNN)As the world watches and waits nervously to learn if Russian President Vladimir Putin will instruct his forces to invade Ukraine, European diplomats are privately finding one small silver lining to the crisis unfolding in Eastern Europe.

The European Union and NATO have been remarkably united during this entire episode, which months ago was in no way a certainty.
Behind the scenes, diplomats, NATO sources and EU officials have praised the “unprecedented levels of unity and coordination” which has “strengthened the transatlantic alliance” as both institutions have worked in lockstep with each other and the US, as one EU official put it.

A senior European diplomat working in NATO said they had been “really surprised but thankful” at the regular contact and cooperation between leaderships of both the EU and NATO which has allowed the messaging directed at Moscow to be “coordinated and consistent at the highest diplomatic level, despite the cultural and geographical differences of all the stakeholders.

While the two institutions should on paper be natural partners, this level of unity was never certain. Relations between the two Brussels-based bodies have been strained in recent years. A particular low came in 2019, when President Emmanuel Macron of France the EU’s biggest military power since the departure of the UK — said that what “we are currently experiencing is the brain death of NATO,” arguing that Europe needed to start thinking of itself as a strategic, geopolitical power.

A serviceman of Ukrainian Military Forces looks through spyglass on his position on the front line with Russia backed separatists, near Novolugansk, in the Donetsk region, on February 17, 2022.

A serviceman of Ukrainian Military Forces looks through spyglass on his position on the front line with Russia backed separatists, near Novolugansk, in the Donetsk region, on February 17, 2022.

Macron has been Europe’s strongest proponent of what Brussels calls “strategic autonomy,” a catch-all term used to describe the EU’s diplomatic independence from larger global powers like the US and China.

A large part of this drive for autonomy has been the EU’s growing differences with traditional allies like the US and UK over economic and political relations with countries such as Russia and China. Across the EU’s 27 member states there are varying levels of reliance on Chinese investment and Russian gas. Some EU nations are relatively relaxed about friendly relations with Moscow as a matter of economic convenience, while others, particularly former Soviet nations, look at what is happening in Ukraine with greater concern and view Putin’s Russia with a similar degree of skepticism to the UK and US.

The EU has also made efforts to have a greater control of its own security — including the ability to deploy troops in its own right. Last year, the bloc put forward plans for something called the “Strategic Compass,” a proposal that would give Brussels the centralized power to activate “rapid deployment groups” of up to 5,000 troops provided by member states to tackle specific issues. Not all member states were thrilled with the idea as they fear it would undermine the security provided by NATO, meaning the proposal could be watered down and practically ineffective.

With that in mind, a crisis like the one in Ukraine could almost have been tailor-made to sow division within the EU in a way that would prohibit strong action such as hard sanctions against Russia — and create an almighty headache when it came to working alongside NATO in a unified Western response.

However, in the face of Russian aggression, the EU has been unusually united and has complemented NATO’s hard line, officials say.
Tensions in the east of Ukraine have risen dramatically. The Ukrainian military said shelling damaged a kindergarten and wounded three adult civilians in Stanytsia Luhanska. The attack blew a hole through the wall of kindergarten number 21.

Officials say the reason it’s worked so well is because the EU has stuck to its strengths, as has NATO. One senior NATO official told CNN that the Ukraine crisis has been a “litmus test” for how the two should operate.

“NATO is a political and military alliance and can talk about bolstering defenses on Europe’s eastern flank. The EU is more of an economic powerhouse that can stand shoulder-to-shoulder with the US when it comes to sanctions,” the official added.

NATO officials, who have in recent years been irritated by and privately dismissive of the EU and its global ambitions, have acknowledged that Brussels has played a role that no other body could match in the crisis.

A senior NATO diplomat explained that the EU has quickly put together proposals for a package of support funds, sanctions against Russia and emergency gas supplies. “We cannot do that, we don’t have the authority, and without even the proposal the Western response would unquestionably have been much weaker,” they said.

However, for all the warm words and talk of “blueprints for cooperation” over Ukraine, both sides accept that once this crisis is over — however long that might be — a frost could return to two of the West’s most important defenders of democracy.

“What’s worked well in this case is a clear delineation of duties based on competences. Where it won’t work in the future is where that line gets blurred. The EU has only decided it wants to be a security player very recently and has made some errors in this crisis,” a NATO official said.

Multiple sources pointed to the coordinated response to a letter sent by Russian Foreign Minister Sergey Lavrov to several countries, including the US, Canada and European nations, outlining Russia’s security concerns. Brussels delights in pointing out that despite sending the letter to dozens of national governments, Lavrov got just two replies: from NATO and the EU.

German Chanellor Olaf Scholz and Vladimir Putin
An EU official told CNN that they could “not think of a better example of the two bodies coming together as partners than the coordinated response to Lavrov.”

But the senior NATO official explained that they thought the EU “wasted far too much effort in writing a response to a letter that had probably been dashed off in five minutes and was designed to cause disruption.” In that respect, the official believes the EU was “naive” and played into Russia’s hands, as the coordinated response “consumed attention here for weeks but ultimately achieved little.”

The European diplomat said that this specific crisis has worked well because “it has been handled at very high diplomatic and geopolitical level. Things like coordinated visits and visible meetings of leaders.” However they too are pessimistic that anything “in the weeds like energy or cyber security” will see a return to two institutions with contradictory interests. Indeed, those issues could even become factors in Ukraine.

But any self-congratulation in European capitals may be premature. Obviously, the situation on the Russian-Ukrainian border continues to be stark and terrifying. Clearly, the Western response to date has only pacified Putin so far and things could still get very ugly. However, after years of private — and sometimes public hostility, the EU and NATO have found a way to get on the same page at a time of great uncertainty for the West. And with numerous looming crises beyond Ukraine, that can only be a good thing.

One of the Ukrainian Presidential advisers, Mykhailo Podolyak, has revealed that as many as 13,000 Ukrainian soldiers have been killed in battle since Russia...
Read more
International News

The ministry accused the U.S. of attempting to tarnish the image of North Korea in the international arena. North Korea has denied having arms deals...
Read more

It was great joy in the home of Mr.Chintua Friday and His wife Mrs. Ebere Chintua as they dedicated their son Master Wealth Chidiebube...
Read more
Load more