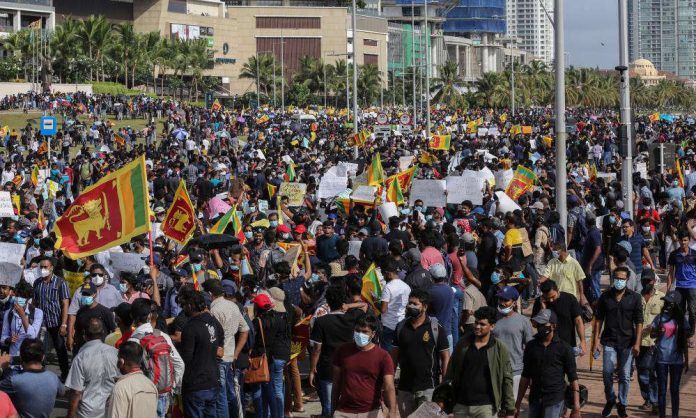 As thousands of angry cries and anti-government slogans filled the streets of the Sri Lankan city, Colombo, on Saturday, Chanda Upul stood quietly nearby, desperately pushing his wares of soft drinks and bottled water on protesters. But in his heart, he was chanting along with them.

As Sri Lanka has descended into its worst financial crisis since independence, with food, fuel, medicine, and electricity becoming increasingly scarce, and calls for the president Gotabaya Rajapaksa – frequently referred to as Gota – to step down, 50-year-old Upul, who lives in a poor northern suburb of the city, is among those who have been pushed to the brink of survival. 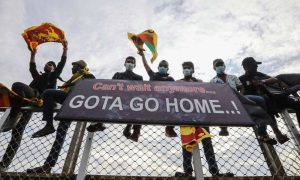 As petrol became scarce and expensive, Upul was no longer able to afford repayments on his rented rickshaw and lost his only means of income. Now he and his four children survive only on rice and water. Vegetables and milk powder are just too expensive these days.

“The only thing we can do now is drink poison, we are finished,” said Upul. “I voted for Gota thinking he was a lion, now I can see that he is worse than a dog. I love my country but don’t know if there will be a country left for my children.”

The impacts of Sri Lanka’s financial meltdown have barely left a corner of the country unscathed. There are the power cuts darkening homes and shop fronts for up to eight hours daily and forcing people to cook on scavenged wood while miles-long queues worm outside at petrol stations. School exams and newspapers have had to be canceled because the government and media houses can’t afford the paper to print them on. Doctors have declared a medical crisis as pharmacies and hospitals are empty of crucial drugs, and warnings have been issued that starvation could be imminent for the country’s 22 million residents as food supplies are dwindling. In Colombo, police stand at road junctions because the traffic lights have been turned off.

But nowhere can the seismic shift in the country be felt more than out on the streets. In recent weeks, protests unlike anything seen in Sri Lanka’s history have taken place across the country, driven not by an organized movement but fuelled instead by a collective rage at the politicians they blame for driving their country into the ground, leading to many describing it as “Sri Lanka’s Arab spring”.

“It’s everyone’s duty to be protesting, the situation here is so bleak for young people,” said Devi. “These corrupt politicians have stolen our money and destroyed our future. We deserve better than this.”

Jehan Perera, executive director of the National Peace Council of Sri Lanka, described the scale and scope of the protests as “absolutely unprecedented.”

“The way people from all communities are coming out onto the streets, I have never seen it before,” he said. “ And it’s happening organically, there’s no mastermind or political party behind all of this. It’s very youth-driven but you’ve got middle-class people, elderly people, wealthy businessmen, families, people who have never protested before.”

“The anger and enthusiasm aren’t dying down,” Perera added. “These protests are not going to end any time soon.”

The wrath of the protesters across the country has mainly been targeted at Rajapaksa, the country’s strongman president who was elected in 2019 on the back of a fierce nationalist agenda. Part of Sri Lanka’s most powerful family dynasty, and in charge of the military during the final years of the Sri Lankan civil war, in which he stands accused of committing war crimes, he was long the most feared man in Sri Lankan politics.

In the past two years, he amended the constitution to strengthen his executive powers and five of his family members took up senior government posts, including his brother Mahinda, who was prime minister.

But his government’s devastating economic decisions since taking power – including scrapping austerity measures when he came into power, cutting taxes to just 8% of GDP, printing vast amounts of money pushing up inflation, refusing to restructure the country’s mounting foreign debt, and using up all the foreign reserves – have now made him the most derided man in Sri Lankan politics. The rallying cry of the protests has been “Gota go home”, a reference to his dual US citizenship.

His entire cabinet resigned this week and more than 40 politicians defected from his ruling coalition to become independent, with one warning that “if we don’t act now, there will be a river of blood in the country”. But Rajapaksa has insisted he has no intention of resigning.

“It’s quite evident he can’t run a government,” said Thiyagaraja Waradas, 35, a senior lecturer at the University of Colombo attending a rally organized by the LGBT community. “The president must go: it’s the only way.”

Waratahs gestured out at the crowds, where national flags mingled with rainbow LGBT banners and trade union placards, to demonstrate the diversity and non-partisan nature of the demonstrations, highly unusual in a country still divided heavily down ethnic lines. Nearby, members of the Buddhist clergy stood in their orange robes solemnly calling for political accountability, and down the road, hundreds of workers from the IT sector could be heard shouting “error 404: democracy not found”. Later that day, the LGBT protest would merge with a Muslim-led rally where rainbow flags flew as Muslim families broke their Ramadan fast and handed out samosas.

“The nature of this crisis is that nobody is left unaffected,” said Waratahs. “Most of my friends struggle to pay rent, they have lost jobs, they don’t have food or medicines. They have almost left our people to die.”

Charu, a 24-year-old student, also voiced his anger at the Rajapaksa dynasty, which has ruled Sri Lanka on and off since 2002. “This is all the fault of the Rajapaksas, with their poisonous nationalism and bad governance,” he said. “People are starving, we are in terrible debt because of him and we can’t even turn the lights on. But he is not taking responsibility.” Like many around him, Charu shook his head woefully when speaking of the future. “I have no hope,” he said.

Many fear Sri Lanka is facing political deadlock as, under its system, Rajapaksa cannot be voted out by parliament. However, the main opposition party is preparing a no-confidence motion against his party in parliament. The opposition’s aim is that with the president in a weakened position, he will either step down or accept legislation that will reduce his powers, enabling them to form a new government out of his grasp. “Gotabaya has lost the confidence and legitimacy of the people, he can’t continue,” said Shanakiyan Rasamanickam, of the Tamil National Alliance party which forms part of the opposition.

On Saturday, thousands turned out at one of the biggest protests in Colombo so far, lining the pavements along the boardwalk where many luxury developments, now considered unaffordable monuments to hubris, have been built over the past few years.

“We want the president to return all the money he has robbed from us, then resign from politics and get out of this country,” said Leakage. “He doesn’t belong here yet he has stolen billions from us, he has a luxury life while we have nothing. Unlike him, with his US passport, we don’t have another country to go to.”

Rajakaruna nodded her head vigorously in agreement. “Even during 26 years of war things never got this bad,” she said. “This is the worst I have ever seen the country.”

Following the death of Queen Elizabeth II, the longest-serving monarch in British history, her eldest son, Prince Charles has reportedly emerged as King of...
Read more