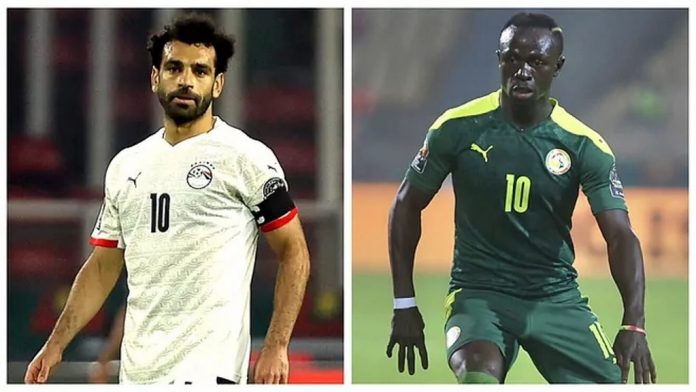 The 2021 Africa Cup of Nations (AFCON) is coming to an end and we are expecting fireworks as Senegal’s Sadio Mane and Egypt’s Mohamed Salah square off on the pitch for the final showdown on Sunday.

Mane and Salah, who are club teammates at Liverpool, will go head to head in a ‘frenemy’ AFCON final encounter when Senegal clashes with Egypt on Sunday night at the Paul Biya Stadium, Olembé, in Cameroon.

Mane has had the most impressive 2021 AFCON of the two, scoring three goals and an assist in his six games so far for Senegal.

Salah, on the other hand, has been a little more muted but has scored two goals and registered an assist so far for Egypt.

Mane recently said that Senegal’s experience of playing in the last AFCON final would be a “good asset” for them in Sunday’s title decider, while Salah expressed his desire to win the tournament.

Together for Liverpool, Mane and Salah are arguably the most exciting in world football.

On this occasion, the duo are pitted against each other as Senegal faces Egypt in the 2021 AFCON final and only one will be able to claim the glory for their country on Sunday.

Liverpool manager, Jurgen Klopp, had already warned both Mane and Salah that one of them will suffer heartbreak at full-time when Egypt clashes with Senegal in the 2021 AFCON final.

Klopp said this during his pre-match press conference ahead of Liverpool’s FA Cup fourth-round tie against Cardiff City on Sunday afternoon.

“Great achievement for both [Salah and Mane] getting through to the [2021 AFCON] final,” Klopp said.

“It won’t be easy because one will be really happy afterward and one less so. It is a chance to achieve something really big.”

Meanwhile, Senegal and Egypt have met twelve times in the past. The Teranga Lions have won four, drawn two, while the Pharaohs have won six.

Egypt have the upper hand when it comes to the AFCON tournament, having lifted the trophy a record-breaking seven times in the past.

Salah and his teammates will be aiming for yet another win, although they will have to make do without their head coach Carlos Queiroz after his suspension in last Thursday’s semi-final encounter against Cameroon.

Senegal, on the other hand, has reached the AFCON final twice in the past but never won the tournament.

Their head coach, Aliou Cisse, was in charge of the team in 2019 when they lost to Algeria in the final in Egypt and played in the 2002 final defeat to Cameroon, missing a penalty in the shootout.

Throughout the 2021 AFCON tournament, we have seen Senegal in an amazing performance of football, dominating their group stage and knockout stage, blazing all the way to the final.

They are currently in top form and boast an outstanding defence, as well as offence game.

Senegal head to the AFCON final after beating Burkina Faso 3-1 in the semi-final, while Egypt defeated Cameroon 3-1 in a penalty shootout after the match ended in a goalless draw after 120 minutes.

However, Sunday’s final will also provide the winners with a huge boost before Senegal and Egypt meet again over two legs in March to decide a place at the 2022 FIFA World Cup finals in Qatar later this year.

The kick-off for the Senegal vs Egypt match is 8 pm.